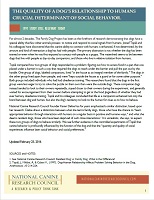 Note: This blog was originally written in 2012, the below document was updated in 2016 to reflect the most recent research.

For almost 2 decades, The Family Dog Project has been at the forefront of research demonstrating that dogs have a special ability that few other animals possess: to notice and respond to social signals from humans. Jozsef Topál and his colleagues have discovered that this canine ability to connect with humans is enhanced, if not determined, by the amount and kind of interaction a dog has had with people. The primary distinction is not whether the dog has been trained or even when he was first exposed to contact with people as a puppy. The watershed seems to be between dogs that live with people as day-to-day companions, and those who live in relative isolation from humans.
Topál compared how two groups of dogs responded to a problem: figuring out how to access food in a pan that was placed under a barrier in such a way that required the dogs to reach under the barrier and pull the pan out by the handle.1 One group of dogs, labeled companions, lived “in the house as an integral member of the family.” The dogs in the other group lived apart from people, and were “kept outside the house as a guard or for some other purpose.” Both groups included individuals who had had obedience training. The researchers found that the dogs in the first group were less eager to try to solve the puzzle on their own than were the outside dogs. These companion dogs instead tended to look to their owners repeatedly, stayed closer to their owners during the experiment, and generally waited for encouragement from their owners before attempting to get at the food, regardless of whether they had ever had any obedience training. Topál and his colleagues concluded that life as a companion enhanced not only the bond between dog and human, but also the dog’s tendency to look to the human for clues as to how to behave.
National Canine Research Council Founder Karen Delise has for years emphasized a similar distinction, based upon her research. Delise draws a distinction between what she terms family dogs, those who have the chance to “learn appropriate behavior through interaction with humans on a regular basis in positive and humane ways,” and what she deems resident dogs, those who have been deprived of such close interactions.2 It is unrealistic, she says, to expect these two groups of dogs to behave similarly. We see further evidence in the controlled experiments of Topál that canine behavior is profoundly influenced by the function of the dog and that the “quantity and quality of social experiences influence later social behavior and social preferences.”

Facebook
Twitter
Email
LinkedIn
PrevPreviousAfter 25 years of ineffectiveness, the State of Ohio finally eliminates statewide breed-specific law
NextOne-hundred years ago, companion dogs were among the victims and survivors of the Titanic.Next