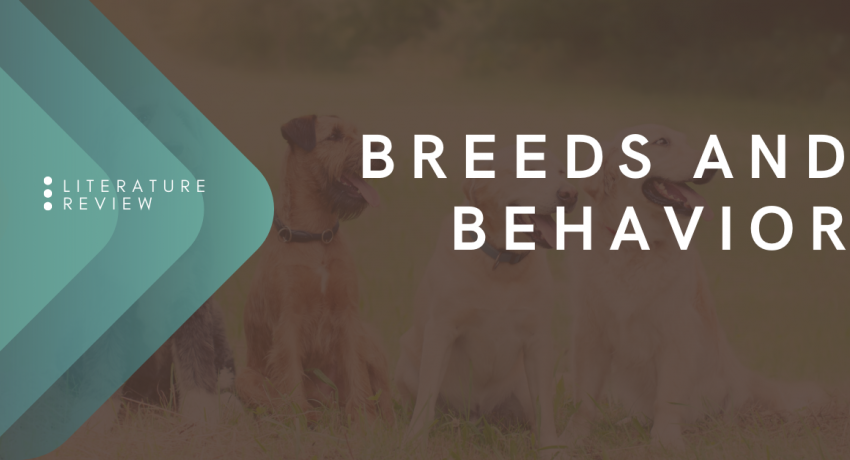 Breeds and Behavior: A Literature Review

“Breed differences” is a popular research topic in the study of canine behavior – it is superficially an easy concept for people to grasp and it makes for flashy headlines. While conclusions regarding breeds and behavior are mentioned and cited in many studies, in this literature review, we confine ourselves to research whose primary focus is this issue and as always in our review process, to studies that either meet a methodological gold standard of seminal works in this area or are frequently cited in the literature and thus have had wide influence, whether or not this has been based on careful critical review. The intuitive resonance of breed stereotypes often leads to an exaggerated impression of any correlations between breed and behavior that can be documented, which in turn has an unjustified effect on public policy regarding dogs. However, there are misconceptions about dog breeds and the corresponding behavioral research that affect our interpretation of breed differences. First and foremost, in any study that includes breed as a variable, it is imperative to conform to a common definition of what is meant by the term “breed” and to know how breed was determined. These conditions are seldom met and there is no consistency among studies when they are. For the purposes of this review, we will stipulate that a breed is a closed gene pool of animals and that this is documented by multi-generational pedigree by a recognized kennel club or by DNA identification as a member of a single breed. As was discussed in depth in National Canine Research Council’s visual breed identification literature review, it is difficult to determine a dog’s breed simply by looking at it, even for experts. Thus, if breed is not known based on DNA testing or pedigree, it is inappropriate to assign a breed label based on physical characteristics. It follows, of course, that breed differences found based on visual breed identification lack validity. Next, there is an implication that breed differences are the result of genetic differences. In reality, there are a number of possible explanations for behavioral differences between breeds, including environmental factors, owner biases, perceptions, and, yes, genetics.

Another question to consider is how breed differences apply to mixed-breed dogs. Almost half of pet dogs in the United States are estimated to be mixed breeds (AVMA, 2012). Can breed findings regarding behavior be applied to any of these dogs? Classic studies (Scott & Fuller, 1965) show the dramatic variety of morphologies that can result from mating two different purebred dogs (yet another reason that visual breed identification is often unreliable). The proportion of the canine genome that determines morphology is very small, at only one quarter of one percent, which begs the question of whether behavioral traits would present in the same way. Of course, this is assuming that the behavior of interest is the result of genetics!

The importance of breed is popular not only in the scientific literature, but also among the lay public. “What breed is your dog?” is a question familiar to most dog owners. “Which breed is right for you?” ask online quizzes on social media. “Top 10 smartest breeds,” report click-bait headlines. There is a persistent belief that there are meaningful behavioral differences between dog breeds, and that you might learn something about an individual dog – how smart, trainable, aggressive, or energetic he is – simply by knowing his breed. One amusing study by Hall et al. (2015) reveals something about these biases. Using a novel odor discrimination task, researchers showed that Pugs, brachycephalic dogs not renowned for their scent abilities, outperformed German Shepherd dogs. The results contradict common beliefs about breed-typical abilities, and suggest that the common practice of using German Shepherds for scent work as police and military working dogs may be more an artifact of folklore than reality.

In some of the studies we include, behavior is described through the use of hands on interactions with dogs, rather than through owner surveys (Svartberg, 2006; van den Berg et al., 2010; Jezierski et al., 2014). However, none of these instruments (surveys or behavior tests) has to our knowledge undergone the scope or rigor of reliability or validity testing required to support the claims sometimes made for the instruments as validated. The accepted range of reliability and validity measures expected when evaluating psychometric instruments would include tests of face validity, test-retest reliability, construct validity, content validity, and criterion validity, and nothing like this scope of examination has been done on any instruments used to assess canine behavior.

An oft cited reason for studying breed and behavior is the notion that, historically, dogs were bred for specific functions and purposes (e.g., herding, tracking, guarding), but over time there has been a shift in selective breeding such that appearance is more commonly targeted. Assuming that there were once significant differences in behavior between breeds, changes in breeding pressures may have reduced or eliminated those differences. To muddy the waters further, Starling et al. (2013) point out that breed origins are not well documented and are often passed down through story-telling, although we do know that most of the breeds we now recognize have only existed since the 19th century. As a result, dogs are frequently grouped based on morphology rather than any verifiable common origin.

Despite these limitations, breed-specific research is diverse in the number and type of breeds tested, as well as the proposed correlated behaviors (although the behaviors rarely have broadly agreed upon definitions) and certainly with regard to the findings. Olfaction, boldness, fear, impulsivity, “aggression,” playfulness, trainability and communication with humans among many others have been studied. There is another body of literature specifically on dog bites, and you may reference National Canine Research Council’s dog bite literature review for more information. With this diversity, the methods for categorizing breed also vary. Some studies discuss individual breeds, while others group dogs based on various aspects of historical function (e.g., hunting, herding; Svartberg, 2006), communicative role (e.g., cooperative or independent; Kovács et al., 2016), genetic clusters (Tonoike et al., 2015), or morphology (Stone et al., 2016).

Unsurprisingly, the methods used to classify dogs, collect data, and define behaviors of interest have yielded different results. For example, Duffy et al. (2008), who used owner surveys, found behavior differences between breeds, but Svartberg (2006), who observed overt behavior, found conflicting differences and could not correlate these with the work that had been historically attributed to breed groups.

Finally, when discussing differences between breeds, one should keep in mind the corresponding differences within breed groups, for both genetic and behavior measures. In Parker et al.’s 2004 genetic study, they found that breed differences accounted for less than one third of total genetic variation among dogs. In addition, breeds grouped according to genetic relatedness differ considerably from the traditional, historical breed groups (Parker et al., 2017). The bias confounds and data verification hurdles endemic to every approach attempted so far may simply be too high to permit valid research on this topic.

References with summaries and analyses in this research library:

Additional References from the text above that do not have summary and analysis entries in the research library: 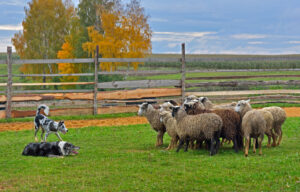 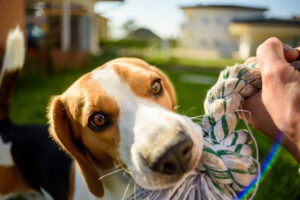 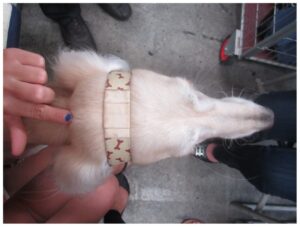 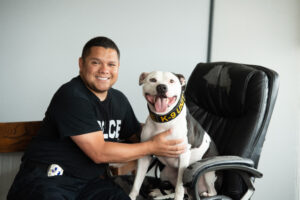 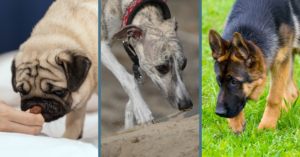 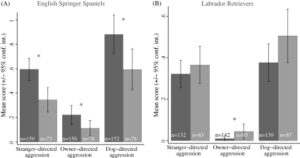