Neuroscience May Confirm What Many Dog Lovers Already Know 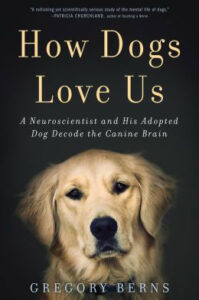 Dog owners regularly attribute emotions such as love and loyalty to their pets, and may be just as regularly dismissed for doing so. The Dog Project, being conducted by Dr. Gregory Berns, a neuroeconomist at Emory University in Atlanta, has detected canine brain activity suggesting that dog owners may have the last laugh.

Dr. Berns studies “the neurological basis for individual preferences.” He uses functional MRIs (abbreviated as fMRI) to measure changes in key parts of people’s brains at a moment when they are making decisions.

A few years ago, he undertook a new, but related, challenge: to obtain fMRIs of wide awake dogs, in order to measure changes in their brain activity in the presence of various stimuli. Dr. Berns describes his purpose as, “to understand the dog-human relationship from the dogs’ perspective.” His findings offer a physical description of what happens in regions of the brain when a dog forms a pleasant association with something. He relates the history of the project, and discusses the result obtained to date, in How Dogs Love Us: A Neuroscientist and His Adopted Dog Decode the Canine Brain.[1] The book has attracted publicity in newspapers both in the U.S. and abroad, including the New York Times.[2] Dr. Berns also appeared on the CBS Morning News.

No doubt, Dr. Berns titled his book on the basis of what happened when the dog was presented with the scents of familiar and unfamiliar persons. The caudate is a region of the brain that neuroscientists associate with human experience of beauty and intense romantic love. It is also a brain region that humans share with many other animals, including dogs. Dr. Berns’ fMRIs showed a dog’s caudate was activated by the scent of a familiar person, but not by an unfamiliar person.

However, even as readers consider the implications of this finding as he describes it, they may find much has already been established from a behavioral perspective, except for direct physical evidence of the caudate activity. The American humorist Will Rogers commented decades ago, “If you get to thinkin’ you’re a person of some considerable influence, try ordering someone else’s dog around.” Rogers knew that dogs respond differently to familiar persons than to unfamiliar persons. In the 1990’s, ethologists in Europe demonstrated experimentally that dogs show patterns of attachment behavior toward their owners similar to those described in mother-infant interactions.[3] A second study showed how the quality of a dog’s relationship to humans was a crucial determinant of its social behavior.[4] Dogs that lived in the house as an integral member of the family tended to look to their owners repeatedly, stayed closer to their owners, and tended to look to their owners for encouragement.

NCRC’s distinction between a resident dog and a family dog, developed by Karen Delise, is founded on the understanding that dogs can form pleasurable, positive relationships with specific human beings when afforded the opportunity to do so.[5]

Dr. Berns’ text contains some surprisingly uncritical breed stereotypes and a muddling of Raymond and Lorna Coppingers’ village dog label. Contrary to Dr. Berns, the dogs in animal shelters are not village dogs, but mostly companion dogs of unknown parentage who have lost their homes. Dr. Berns acquired Callie, a mixed-breed dog whom he was able to train to undergo an fMRI, and all of his companion dogs, from animal shelters.

The book contains a few pages of endnotes, but no index, which, even given the limited amount of technical information the reader is asked to retain, is unfortunate.

Dr. Berns and his colleagues have published one paper to date on the Dog Project.[6]  The concluding chapters of the book hint that a second paper is in the works, or may already be on submission.

For confirmation, we encourage you to read this book.